Serving Raleigh and the surrounding areas since 1910.

Your local Pharmacy in Raleigh, NC

Person Street Pharmacy is the best pharmacy and compounding pharmacy in Raleigh.  We provide personal attention to each and every one of our patients.  Whether you come to our downtown Raleigh location, or have us ship it to you, you’ll get cheaper prices and better service than the chain stores.  Get your prescriptions filled in minutes and shipped same-day anywhere in North Carolina.

Trey Waters was born and raised in Bristol, Virginia and first became interested in medicine as a child. At the age of 12, he learned that his grandfather had been diagnosed with Diabetes and took the opportunity to help him figure out his medications and set up a dosing chart. From that point forward, Trey pursued his goal of becoming a pharmacist. He was fortunate enough to be accepted into the Pharmacy School at Campbell University when he was 19 years old. In addition to his Pharm.D. degree, Trey completed a Fellowship in Anti-Aging, Regenerative, and Functional Medicine (A4M) from the South Florida School of Medicine. Professionally, Trey has been honored to receive The Roche Pharmaceutical Communications Award, Campbell University Distinguished Alumni Award, and the Keith Fearing Award. He has also served on several boards, including the Retail Advisory Board at NC Mutual, Dean’s Board of Advisers from Campbell University, and Corista, LLC, a digital pathology company. Trey acquired Person Street Pharmacy in June 2014 and has been happy to participate in Raleigh’s continued growth. Outside of work, Trey enjoys crossfit, spending time with his dog, Petunia, traveling, and taking part in all Raleigh has to offer. 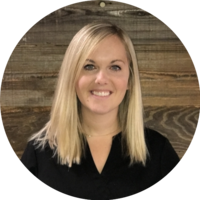 Emily grew up in Winston Salem, NC and moved to Raleigh in 2007 to attend North Carolina State University. In 2010, Emily left NCSU to attend Campbell University’s School of Pharmacy. There, she received her Pharm.D and MBA, graduating Magna Cum Laude in 2014. Following graduation, she worked at CVS for 3 years before coming to Person Street Pharmacy. She always wanted to work in an independent pharmacy, where she could help serve her community and is thrilled to be working at Person Street Pharmacy. Emily is certified in the North Carolina State Medical response system, where she will be called to help in emergencies. In her spare time she enjoys spending time with her husband Grayson, 2 sons Graham and Connor, and daughter, Alice. She also travels home frequently to help run the family business, Weathervane Winery. 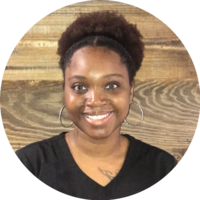 Ty’Resha, aka Ty is originally from Elizabeth City, NC. She moved to Raleigh in 2013 to be closer to her family. She attended NCSU and afterwards started working for CVS Pharmacy. Ty’Resha is a mother to two beautiful girls, 10 & 8 year olds who she loves dearly. In her free time she enjoys spending time her kids, going to Starbucks and listening to crime junkie 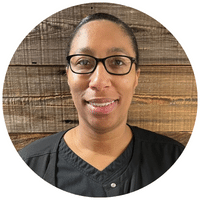 Shereca has been married for 16 years to her husband Archie and they have two children, Kimora and Jayden. Her hobbies are reading, shopping, and spending time with her family. She went to Wake Tech for their pharmacy technician program. She has lived in Raleigh for 18 years and loves what she does!

Argentina is an Interdisciplinary Studies student with a concentration in Graphic Design at William Peace University pursuing a career as a lawyer. During February 2022, she participated in the North Carolina Independent Colleges & University (NCICU) Ethics bowl to represent William Peace University and her team was undefeated. She moved to Raleigh, North Carolina in 2017 from Mcallen, TX to study Graphic Design at Wake Tech Community College. Her hobbies are reading, hiking, cooking, and traveling. She has also been dating her boyfriend John since 2019.

Teresa is from Bergen County, NJ. She’s been living here since 2018. She has a degree in surgical technology. She loves working in the pharmacy and interacting with everyone. Her hobbies include staying active, working out, & cooking lots of yummy foods. She also has a small business making yummy truffles. 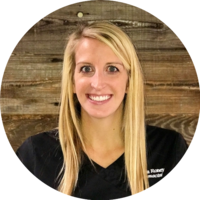 Maresa was born in Tucson, AZ, but moved to Washington DC when she was 6. She came down to Raleigh on a swimming scholarship for NC State. After graduating with a BS in Biological Sciences and a minor in genetics, she furthered her education at Campbell University School of Pharmacy. There, she received her Pharm.D and MBA, graduating cum laude in 2014. She worked for Rite Aid after graduating but always wanted to work for a neighborhood pharmacy. With Person Street Pharmacy, she found the perfect opportunity. Outside of work, Maresa spends time with her husband Jack, 5 kids, and all their farm animals. She also enjoys competing in triathlons, and is a huge NC State fan! 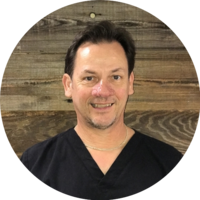 Doug was born in Raleigh and raised in Warsaw, NC until age 7. When he was 7 his family moved back to Raleigh and he’s been here ever since. Doug is very patient-focused and enjoys making pharmacy deliveries and interacting with patients every chance he gets. Outside of work Doug enjoys working out, concert going, watching NASCAR (he hasn’t gotten to go to a race yet but wants to!), and spending time with his family. 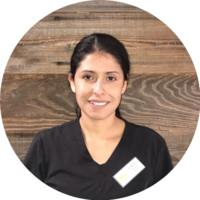 Yuri was born in Mexico and moved to North Carolina in 1998. She is the oldest of 4 siblings and has 2 wonderful kids. She worked at Cafe Carolina in Cameron Village for 10 years before she started working at Rite Aid located off Hwy 401. After working for Rite Aid for 3 years, they were bought by Walgreens and closed the location Yuri had spent most of her time. After the turn of events, we were lucky enough to find Yuri and provide her what she likes to call a “home” at Person Street Pharmacy. 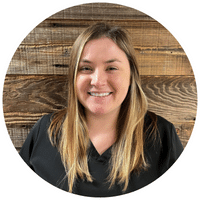 Jenny is from Dunn, North Carolina and moved to Raleigh in 2018. She attended The University of Mount Olive where she played tennis on a scholarship and received a Bachelor of Science degree. She really enjoys working at an independent pharmacy because of the relationships that can be built with patients. Her hobbies include playing tennis, golf, reading, spending time with friends and getting to the beach as much as possible!

Megan grew up in Dunn, NC and has lived in the Raleigh area since 2016. She has over 8 years experience working as a pharmacy technician and enjoys working with an independent hometown pharmacy. She has been married for nearly three years and has two fur babies, Harley and Belle. Her hobbies include going on hikes with her husband & doggies, watching movies and taking trips to the beach whenever she can!

To be the best pharmacy in Raleigh and beyond

Going to the pharmacy shouldn’t be something you dread. We create the best pharmacy experience for our patients.  We believe that each patient requires a personalized solution, and we’ll help you find it. If you’re wondering if there is an option outside of “main-street” medicine, ask. Don’t want to come in? We’ll ship for free. Sick of paying too much? Check out our extended day supply program on generics–we beat the chains routinely. Feeling awkward about talking to your doctor? Come talk to us first. Gone are the days of long wait lines, being treated like a number, or using “discount” cards to save money. We’re here to help.